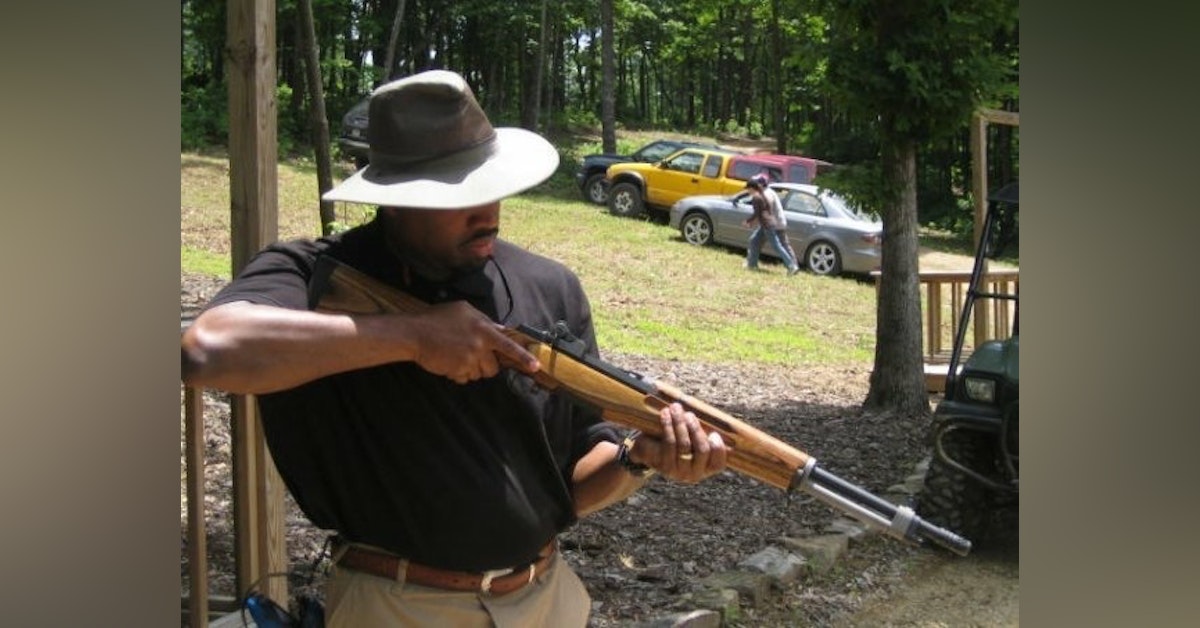 “There is no such thing as a 'self-made' man. We are made up of thousands of others. Everyone who has ever done a kind deed for us, or spoken one word of encouragement to us, has entered into the make-up of our character and of our thoughts, as well as our success.”

Armed Citizens News, Michael J. Woodland on bore sighting, what is it? I have a new project coming, and encouraging the old guys, the OG’s

Crossbreed Holsters dot com and the United States Concealed Carry Assoication present, the black man with a gun show , the show that celebrates Americana, freedom, encourages, inspires, and introduces interesting people, new products from the internationally known Black Man With A Gun, and that’s me, Kenn Blanchard. If you would like to reach me my contact info is on black man with a gun dot com

I have discovered that the best people in my life, listen to this show.

I didn’t go to the SHOT Show because I didn’t have a plan. I could go, spend the money, see folks in the industry that I love but couldn’t motivate myself to do it.

I am trying to do something more than just beg for money and look like I am doing something. I want to really make a difference. I’m older now, don’t like wasting time, yours or mine.

You with me on that?

This show is dedicated to the guys that have survived to sport the gray hair. Fellas, don’t be ashamed, don’t get stressed out about being older, or not looking like you did when you were 25. Going to talk about middle age a little on this show and let you know its better than OK. Its going to be our redemption song. Maybe it’s the Jamaican coffee but I am feeling mellow, so this show is going to stay low key. This show might put some of you 5-11 shorts, tactical vest chest wearing, never been in combat, 3 pt slinging call of duty addicted, adrenaline junkies to sleep but that is alright, this is for the OG’s.

Fellas, I was born in the same year as Wesley Snipes, Tom Cruise, Matthew Broderick, Axl Rose, Ralph Fiennes, Demi Moore, Jim Carrey, and Sheryl Crow. The year was 1962. I survived civil rights, school busing, and some stuff that I can’t even speak about. You should be proud to have made it too.

I know if you are active on the net, facebook, forums etc, the younger guys rule for the most part and you can feel kinda out of it. I am here to tell you, its all good. We were young once too. If they are fortunate that might make it to our age. It made me think about the movie The Unforgiven and the Shootist, Rooster Cogburn and the movies where the old guys still got it.

When I started in security and then law enforcement I was trained with and carried a smith and Wesson model 19. That means I used the fabled speed loaders extensibly. Courses were really static practical pistol courses back then with a lot of time and barricades.

I carried a revolver in my travels prior abroad too, I switched to Browning Hi-Power however when I started doing executive personal protection details in Central and Latin America and the Middle East. The coveted trainers were the now gone guys, Charles Taylor, Jeff Cooper and their disciples. Masaad Ayoob was there too, but he was the smarter one. He dealt with the mind more than the macho. He has progressed and kept up with the times unlike many of the old dudes.   It was the age of the .45. You weren’t cool if you carried a 9mm but I usually did because it was easier to obtain 9mm internationally, and made a smaller footprint. Who was the gringo looking for .45 caliber ammunition esse? I trained ivy league types going into hostile environment, I qualified police and security officers for duty. I shared some of my mistakes carrying in countries where it was illegal for a foreigner to be armed. I shared stories of what happens when the feces hits the oscillating device. By the time I got to the Far east, I was using the Glock 17 first generation of course! In the 90’s I opened a business to help security guards qualify for armed duty and the new gun owner be safer that bombed. The guards didn’t want training they just wanted permission to carry so they could get paid higher than the unarmed post. Most hated firearms, didn’t know about gun rights, history or the sports involved.

I’ve actually hit more bad guys when I was driving in the protective details I was on that I have shot people but that is something for another time.

I was checking out the AR-15 world and on the rifle front, I am kinda lacking. I carried an uzi and a HK MP-5 a few times when I wasn’t the advance or on hot seat. I carried an M-16A1 back in corps. All back in the days of wine and roses of course.

Today, I hear the same arguments I did back in 1991 when I started my firearms training company. I think that is why I am so melancholy, been doing this stuff a long time and didn’t win the war.

Still hear folks talking about 9 mm over the .45.

For the record, I agree that the 1911 has its place but your choice for a self-defense side arm should be a newer polymer, double stacked something. We used to say if you need more than two rounds you are in combat and have the wrong firearm anyway. Well, I have since understood that bad guys have evolved and become more tribal. You are likely to have multiple attackers, a mob or a gang and need that spare magazine. Folks don’t stay down when shot. They don’t surrender if you don’t stop them and life in general is just going to suck during and after the incident so get over it, get through it and survive.

Everything is not combat though. You can’t live in a Call of Duty condition. So listen up you wanna-bee, mall ninjas, keyboard commandoes, three gun gear nerds, if you decide to get a concealed carry permit, its not a hunting permit on people that piss you off. All threats don’t require lethal force. If you can you can leave, leave. If someone hurts your feelings, insults you wife, live with it. I am saying this because just it just seems to be a rash of stupid people making the news. Too many immature, untrained and unskilled guys out there itching for a gunfight.

The only person I know out there teaching you how not to end up on the news, on YouTube, and in jail through necessary judicious use of force curriculum is Massad. I know you bought the firearm, You got the magazines, the pouches, the belts, the pants with the pockets, you got ammo for days, but every day is not combat.